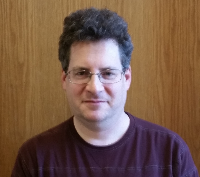 all office hours above are wrong, because the form only allows for multiples of :15. See syllabus.

eh. not so much. It's pretty much impossible to squeeze research into my teaching schedule.

my dissertation is in ergodic theory -- which is a fancy word for mixing -- applied to continued fractions. I can send you a copy of the intro if you're curious.

I have also done some work on connection games. This work is neither game theory nor combinatorial game theory. I wanted to prove that someone must win at the game of Atoll. This required some graph theory. Doesn't make me a graph theorist. I just do Math.

I would love to do more work in either area if I had the time.

My Erdos number is 5.

See my Google scholar page. My h-index is 2. (Only eighty-something to go to catch Sontag!)

I have spoken about Connection Games at several places, including the MOVES conference at the Museum of Mathematics, TCNJ, DIMACS, and a special session on the Mathematics of games and puzzles at the Joint Meetings in New Orleans, 2011. In 2017, I spoke again at MOVES, this time on wiggly games.

I have given a couple talks about my dissertation research, at the Joint Meetings in San Francisco in 2010, and at an MAA meeting at Rutgers in 2013.

Other topics for "recreational" talks that I have given (but not recently) and enjoyed include continued fractions (not an ergodic theory talk), infinity (this is a talk about games, obviously) and tilings.

I have a non-course-specific Sakai site, mostly dedicated to nonsense, on which I occasionally post something useful. These useful things sometimes include practice exams. If that's what you thought you might find by clicking on "Resources", then go ahead and join that Sakai site.

Born and raised in the Garden State. Undergrad at Wesleyan in Middletown CT, grad at UConn.

Participated in the Budapest Semesters program as a junior. Highly recommended.

Besides Rutgers, I have taught at The College of the Holy Cross, St. Olaf College, Gustavus Adolphus College, The College of St. Benedict and St. John's University, UPS, and a school that I would rather not mention.

Outside of Rutgers, I am on the organizing committee for the New Jersey Undergraduate Mathematics Competition, and I am on the editorial panel for the journal Game and Puzzle Design. (Make that "was"; GAPD is on indefinite hiatus.)

Information for these classes will be available on Sakai.